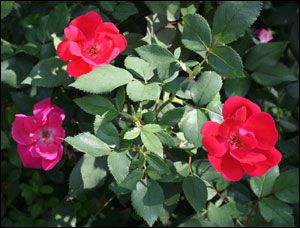 Knock Out® roses are the hottest plants to hit the market in years. Gardeners love these colorful shrub roses because they bloom profusely with minimal care. The original Knock Out® Rose was introduced in 2000 and has since become the most widely sold rose in North America, according to the Conrad-Pyle Company.

Knock Out® roses can be grown throughout Florida and will bloom practically yearround in most of the state. They are drought tolerant, self cleaning, and resistant to black spot and powdery mildew. Since they require little maintenance, they are ideal for gardeners who enjoy roses but who aren't interested in the upkeep required to grow hybrid tea roses. The only drawbacks of Knock Out® roses are that they don't have a strong fragrance and they don't last long as cut flowers.

The Knock Out ® family of roses was started by rose breeder Bill Radler when he crossed seedlings of 'Carefree Beauty' with 'Razzle Dazzle' to create the original Knock Out® rose. The family now includes varieties that range from blush to vibrant red, and even yellow:

Both the original Knock Out® and the Rainbow Knock Out® roses were named All-America Rose Selections (2000 and 2007).

Like all roses, Knock Out® roses need to be planted where they will receive at least six to eight hours of sun each day. It also helps to have a site with good air movement and well-drained soil that falls between pH 6.0 and pH 6.5.

Knock Out® roses generally grow three to five feet tall and equally as wide, but some sources say they can reach eight feet tall if not pruned, so be sure to space them appropriately.

After planting, water them regularly until they get established. Also apply a three-inch layer of mulch to help retain moisture in the soil, pulling the mulch back from the stem of the plants.

These roses are winter hardy to USDA zone 5 and also have good heat and humidity tolerance that allows them to grow through zone 9.